Could the Fed trigger the next “financial crisis“as they begin to raise interest rates? Surely that is a question worth asking as we look at the history of the Fed’s previous monetary actions. in “Investors are pushing risk bets.” Witness it:

“With the entire financial ecosystem more heavily indebted than ever, ‘stability instability’ is the most significant risk.

The “stability/instability paradox” assumes that all actors are rational and involves avoiding destruction. In other words, all players will act rationally, and no one will press the “big red button”.

The Fed is heavily dependent on this assumption. After more than 12 years of the most unprecedented monetary policy program in US history, they are trying to navigate the risks accumulated in the system.“

The problem, as shown below, is that throughout history when the Fed starts raising interest rates, someone inevitably pushes the “big red button”. This has been the case every time the Fed has raised rates. 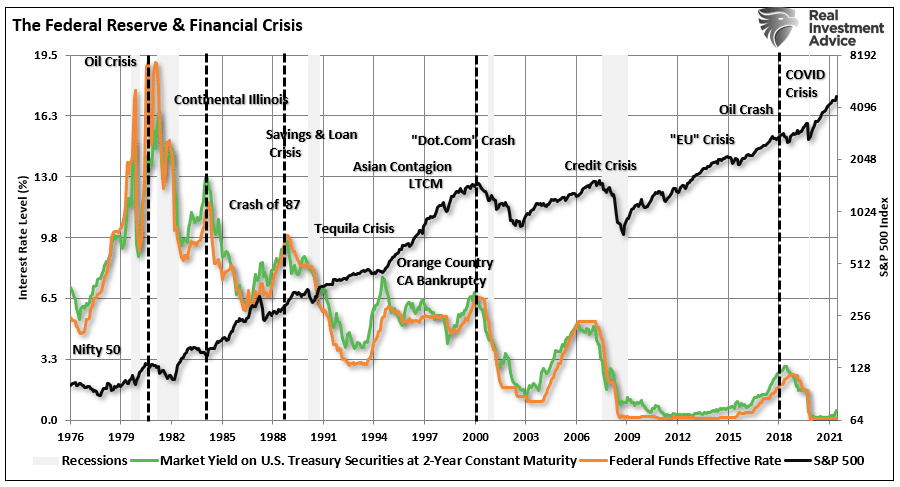 The behavioral biases of individuals remain the most serious risk facing the Fed. While they may hope that individuals will act rationally when raising rates and tightening monetary policy, investors tend not to act that way.

It is important to note that every previous crisis in history was primarily a function of extreme excesses in some area of ​​the market or economy.

A bubble in “Everything”

No matter which corner of the market or the economy you look at, there are excesses.

The list could go on, but you get the idea.

There is a correlation between Fed interventions and the rise of speculative risk-taking. As noted, household ownership is strongly correlated to the Fed’s balance sheet.

Unfortunately, to invest in the financial markets, individuals must have disposable income with which to invest. However, while massive Fed interventions inflated the largest financial bubble in history, they did little to spur economic growth or prosperity. As a result, the top 10% of earners own about 90% of financial market assets.

Unsurprisingly, after more than a decade of ultra-loose monetary policies, risk appetite surged as participants came to believe that the Fed had eliminated everything. “risk.”

Of course, if there is “no risk of loss” why not take more risks? That’s exactly what everyone did.

In Seth Klarman’s famous book, “A margin of safety” he discussed the bond mania of the 1980s before it imploded. At that time, many companies issued bonds even though they could not afford the interest charges. Today we call these companies “zombie companies“, because they have to feed on cheap debt to stay alive. Currently, the market capitalization of these zombie companies is at an all-time high.

The obvious problem is what happens when they can’t refinance their debt. Unfortunately, as Kailash Concepts explains, the debt itself is a significant risk.

“Right now, the world is steeped in financial alchemy. There are currently a record number of companies unable to cover their interest charges with profits.

Since 2007, much of the US debt crisis has moved from the financial sector to over-leveraged non-financial stocks. We believe the combination of record high debt and equity valuations is likely a side effect of real rates approaching lows last seen in 1973. Whether we are right or wrong about causality, the facts are in our view intimidating. .

Our research has shown that the world has never been less prepared or less equipped to deal with a possible spike in inflation or a rollback in federal largesse. 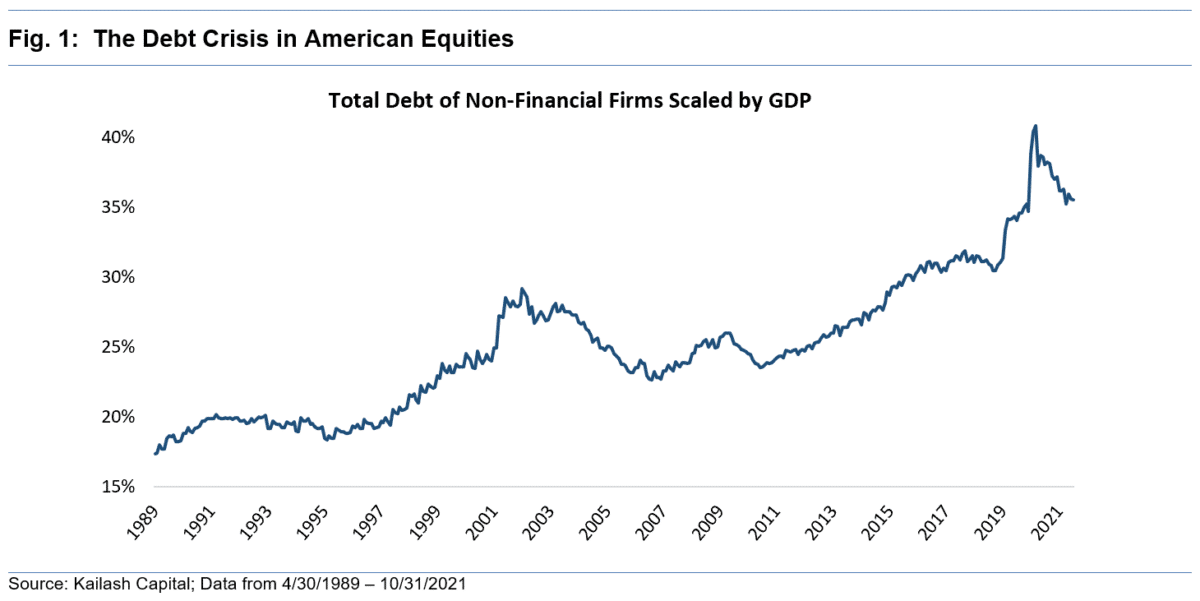 However, this is not just a corporate debt bubble. It is also a bubble in investor leverage as individuals take on debt to chase the markets. 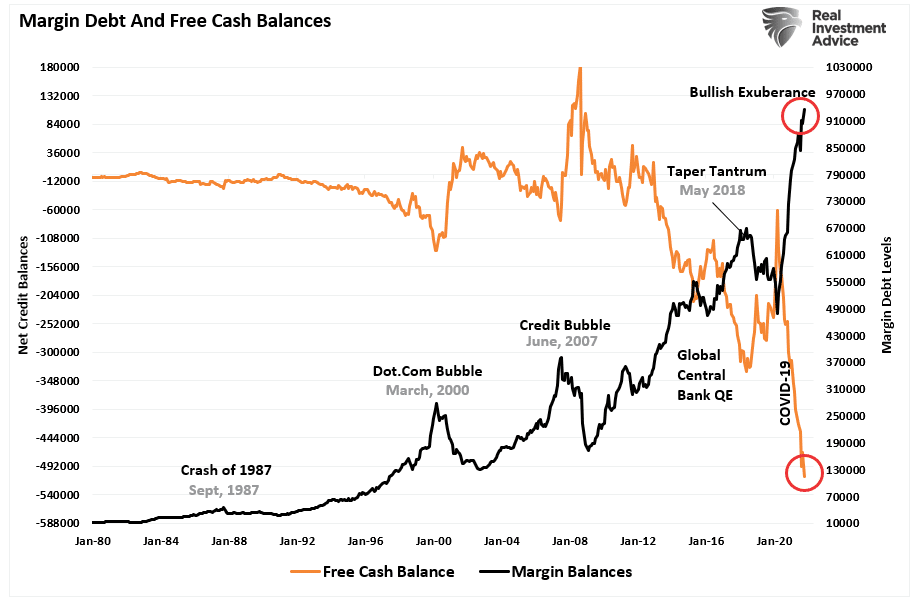 Of course, the critical thing about “margin debt” is that it is fueling the bullish advance. But, unfortunately, it also accelerates the eventual decline of the market as the leverage reverses. It’s always a brutal and maiming event, which is why Wall Street calls it a “bear market”.

In “Rising interest rates are significant” we discussed that if interest rates rise, the Fed tightens monetary policy, or the economic recovery falters, a financial crisis is possible.

“In the short term, the economy and markets (due to current momentum) may DEFY the laws of financial gravity as interest rates rise. However, they act as a ‘brake’ on activity economic because rates have a NEGATIVE impact on a heavily indebted economy:”

More importantly, over the past decade, the primary rationale for overpaying for equity ownership has been that low rates justify high valuations. Unfortunately, with inflation soaring, squeezing profit margins, and the Fed poised to hike rates, valuations are probably a bigger issue than most realize.

As Mohammad El-Erian said in a recent interview:

However, for now, there is no reason to worry about what will happen next. “financial crisis.”

Well, that’s unless someone pushes the “big red button”.

Editor’s note: The summary bullet points for this article were chosen by the Seeking Alpha editors.