The European office market faces the toughest conditions since the financial crisis, experts have warned, as rising interest rates and soaring construction costs threaten to stifle its post-pandemic recovery.

According to analysis by Bank of America, higher interest rates and a broader tightening of financial conditions have pushed the cost of servicing debt for office owners above the rental income they receive for the first time since 2007.

This is already chilling investment in the sector and could cause difficulties for highly leveraged office businesses.

Rising base rates have increased debt servicing costs for office owners. But that’s just the tip of the iceberg, according to Marc Mozzi, real estate analyst at BofA.

“When it comes to interest rates, that’s only about a quarter of the cost of borrowing for European property companies. The credit spread is the hidden part of the iceberg,” Mozzi said, referring to a measure of how much extra a company has to pay to borrow compared to a sovereign issuer.

Over the past 12 months, credit spreads have doubled for UK-listed property companies and almost tripled for European groups, according to BofA calculations, indicating that bond investors are increasingly worried about the solvency of companies.

The deteriorating outlook comes after the Bank of England earlier this month recorded the biggest hike in its key interest rate in more than a quarter century, as it intensifies the fight against the inflation.

The office market had a dynamic start to the year but has since collapsed. In London, the value of deals closed in the first quarter of the year was 105% above the 10-year average; but in the second quarter it was 27% below that level, according to Mark Ridley, boss of estate agency Savills. 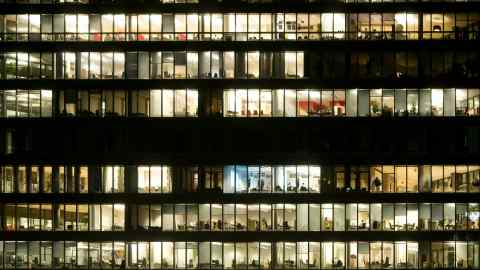 Executives say the challenge could become more difficult when buyers have to refinance debt they used to buy buildings.

“Look at the financial crisis and what happened: the pinch points were the moments of refinancing, that’s where the pressure can come,” said Adam Goldin, head of UK operations for CC Land, the Chinese developer. owner of London’s Leadenhall Building, known as the “Cheesegrater” skyscraper.

“If you just don’t have the money to refinance, then you don’t have the money. . . There are many organizations there, [such as] funds that are closed and cannot invest more money, so their only direction is to sell. We will then find out how much capital there is to buy,” he added.

A recent survey by the Royal Institution of Chartered Surveyors, a leading body in the real estate industry, found that around half of estate agents, surveyors and consultants in Europe and the United States who have replied “consider that the market has entered the slowdown phase of the real estate cycle”.

Nevertheless, they point out that the level of debt in the sector is now much lower than it was before the financial crisis, and that other investors and buyers will step in once office prices fall further.

But Mozzi is skeptical. “Why would anyone buy something that gets less than what they pay for?” he said.