Signs of economic weakness are mounting.

Recessions, like unhappy families, are each painful in their own way.

And the next one – which economists see as increasingly possible by the end of next year – will likely confirm that. A slowdown in the United States may well be modest, but it could also be long.

Many observers expect any decline to be much less heartbreaking than the Great Financial Crisis of 2007-2009 and the subsequent downturns seen in the 1980s, when inflation was last so high. The economy just isn’t as out of whack as it was in those earlier times, they say. 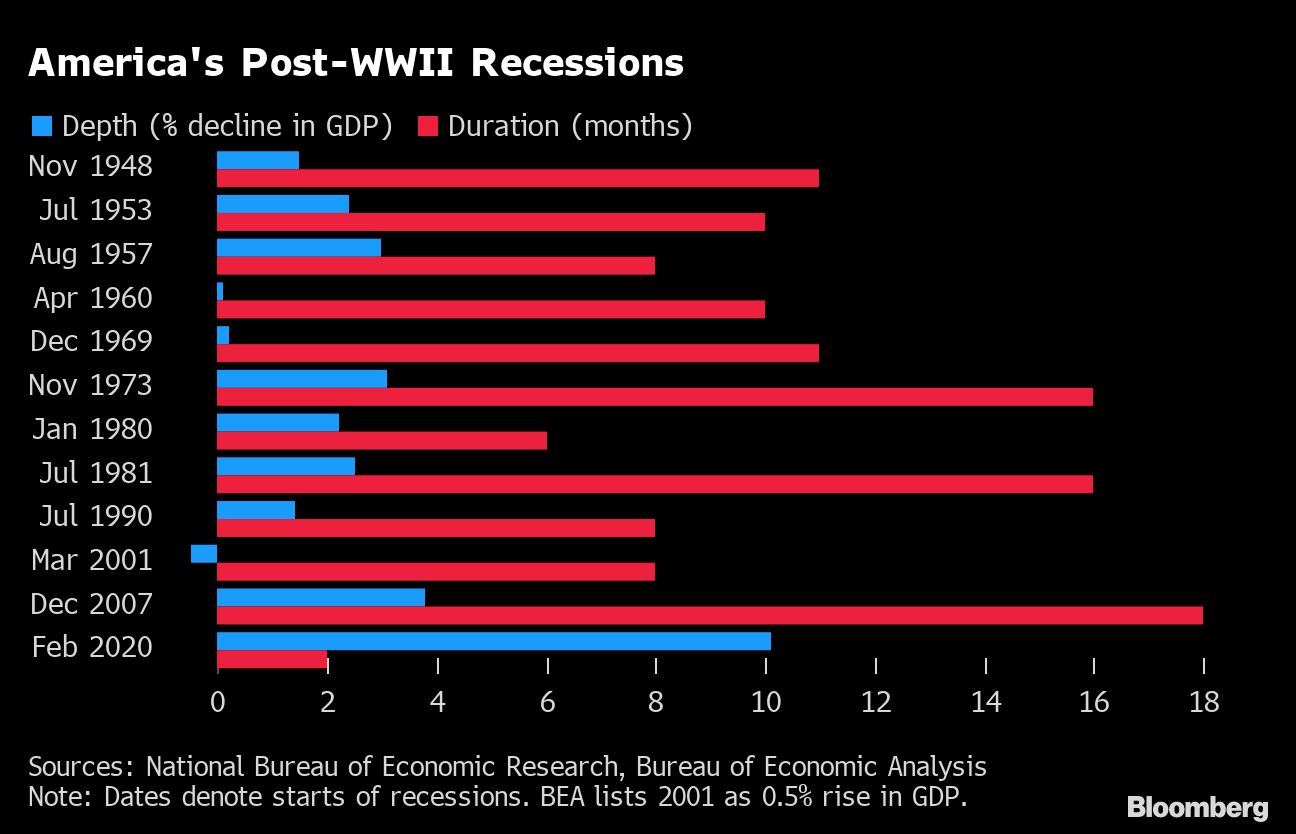 While the recession may be mild, it could end up lasting longer than the abbreviated eight-month contractions of 1990-91 and 2001. Indeed, high inflation may prevent the Federal Reserve from rushing to reverse the downturn.

“The good news is there’s a limit to how bad it gets,” said Robert Dent, senior U.S. economist at Nomura Securities. “The bad news is that it’s going to be extended.” The former New York Fed analyst predicts a contraction of around 2% starting in the fourth quarter and lasting through next year.

Whatever form the withdrawal takes, one thing seems certain: there will be a lot of hurt when it happens. In the dozen or so recessions since World War II, the economy has contracted an average of 2.5%, unemployment has risen by about 3.8 percentage points and corporate profits have fallen by about 15%. The average duration was 10 months.

Even a downturn at the shallow end of the spectrum would likely see hundreds of thousands of Americans — at least — losing their jobs. The battered stock market could take another dip as earnings fall. And President Joe Biden’s already mediocre polls could take another hit.

“It would be the sixth or seventh recession, I think, since I started doing this,” said private equity veteran Scott Sperling. “Each of them is somewhat different, and each of them feels equally painful.”

Signs of economic weakness are mounting, with personal spending falling in May for the first time this year, after controlling for inflation, and a US manufacturing indicator hitting a two-year low in June. JPMorgan Chase & Co.’s chief U.S. economist, Michael Feroli, reacted to the latest data by slashing his mid-year growth forecast “perilously close to a recession.”

The depth and duration of the recession will largely be determined by how much inflation persists and how much pain the Fed is willing to inflict on the economy to bring it back to levels it deems acceptable. 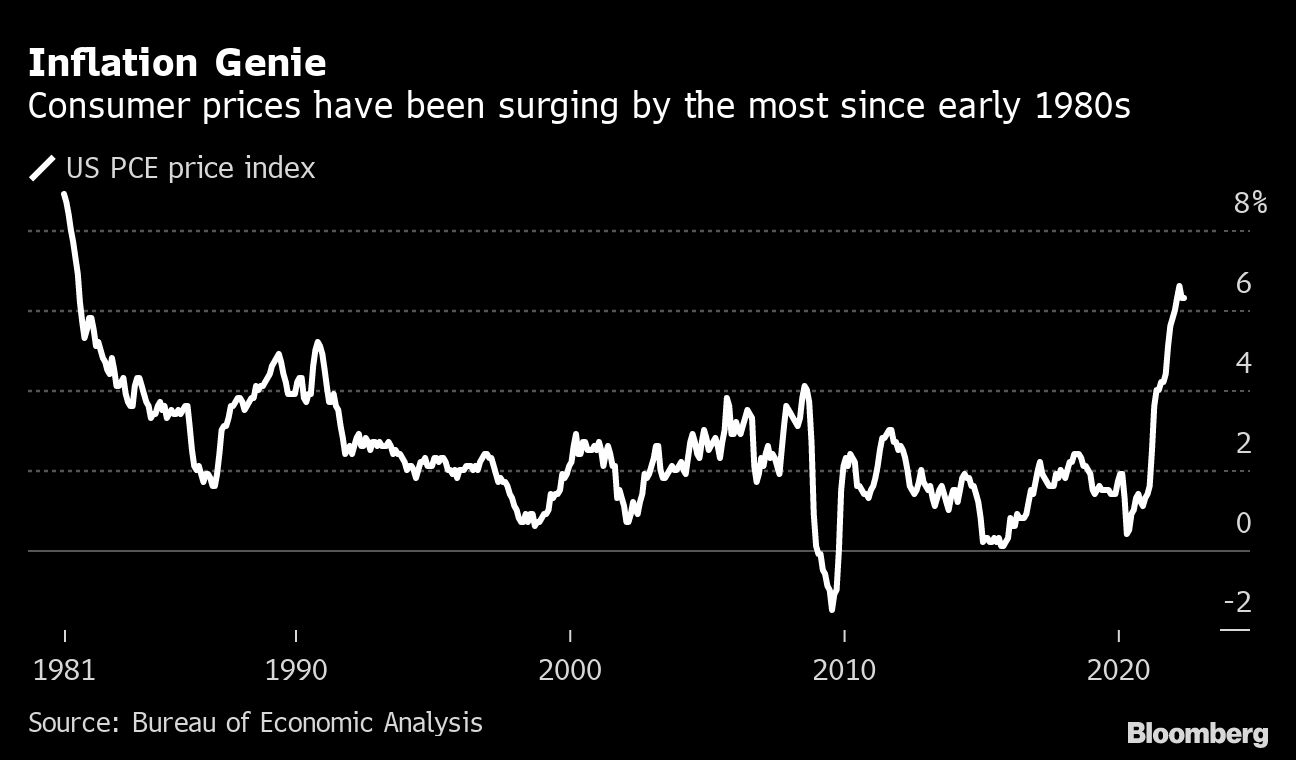 Allianz SE chief economic adviser Mohamed El-Erian said he was worried about a stop-go scenario akin to the 1970s, where the Fed prematurely eases policy in response to economic weakness before easing. to have eradicated inflation from the system.

Such a strategy would set the stage for deeper economic decline and even greater inequality, the Bloomberg Opinion columnist said. El-Erian warned last year that the Fed was making a big mistake by downplaying the inflationary threat.

“The Fed isn’t going to stop until it sees that inflation has come down convincingly. That means this Fed will sink deeper into economic weakness, likely prolonging the duration of the recession.

For his part, Fed Chairman Jerome Powell argued that while there is a risk of recession, the economy is still in good enough shape to withstand Fed interest rate hikes and avoid a slowdown.

A growing number of private economists are unconvinced.

“A failing economy is anything but inevitable,” said Lindsey Piegza, chief economist for Stifel Nicolaus & Co. “The question has moved beyond whether we’re going to see a recession how deep and how long a downturn is.”

Just like 40 years ago, the decline in gross domestic product will be driven by a central bank determined to rein in runaway consumer prices. The Fed’s preferred inflation gauge is more than triple its 2% target.

But there are good reasons to expect the outcome won’t be as bad as the early 1980s or the financial crisis of 2007-2009 – episodes when unemployment soared to levels at two figures.

As Goldman Sachs Group Inc. chief economist Jan Hatzius has noted, inflation is not as entrenched in the economy or in the psyche of Americans as it was when Paul Volcker took over. head of the Fed in 1979 after a decade of persistently strong price pressures. So it won’t take such a big slump for the Fed today to bring price increases back to more acceptable levels.

Prominent academic economist Robert Gordon estimates that the Fed’s task today requires about half the amount of disinflation that Volcker had to put the economy through.

In addition, consumers, banks and the housing market are all better positioned to weather economic turbulence than they were before the 2007-2009 recession.

“Private sector balance sheets are in good shape,” said Deutsche Bank Securities Inc. chief US economist Matthew Luzzetti. “We haven’t seen leverage as much as we have seen” before the financial crisis.

Thanks in part to large government grants that boosted savings, household debt was just 9.5% of personal disposable income in the first quarter, according to Fed data. This is well below the 13.2% observed at the end of 2007.

Banks, for their part, recently passed the Fed’s latest stress test, proving they have the wherewithal to weather an ugly combination of rising unemployment, collapsing house prices and falling stocks. shares.

And while housing has been battered lately by the Fed-induced mortgage rate hike, it is also in a better position than it was in 2006-07, when it was awash in supply due to a speculative boom in building.

Today, the United States has about 2 million housing units “below what our demographic profile would suggest at this point,” said Doug Duncan, chief economist at Fannie Mae. “That puts to some extent a floor below how deep a recession could be.”

Duncan’s base case is of a sharp depreciation in house price increases, but not an outright decline.

In the labor market, an underlying shortage of workers – driven by retiring baby boomers and delayed immigration – is likely to make companies more cautious about laying off staff in a downturn, especially if it is light.

“The story for the past two years has been that companies are struggling to find workers,” said Jay Bryson, chief economist at Wells Fargo corporate and investment banking. “We don’t think you’re going to see mass layoffs.”

Some economists say the next recession will prove long-lasting, however, if the Fed refrains from bailing out the economy – as has been reported if inflation remains stubbornly high.

Powell told a conference of central banks last week that failing to restore price stability would be a “bigger mistake” than pushing the United States into a recession.

Fiscal policy will also be crippled — and could well turn restrictive — if Republicans regain power in Congress, as seems likely in November’s midterm elections. In an echo of what happened after the financial crisis, GOP lawmakers could use standoffs on the debt limit to push for government spending cuts.

Without predicting a slowdown, JPMorgan’s Feroli agreed that a recession could be long if it occurs. This would be especially true if the Fed were once again prevented from helping the economy by not being able to cut interest rates below zero.

“We don’t think it will be serious, but it could be a long time,” he said.